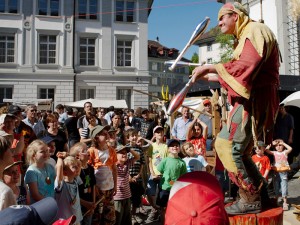 With incredible skills and at a breathtaking speed the Jester presents his unique comedy juggling with three, four and five balls. Impeccable technical skill combined with hilarious facial expressions and ingenious improvisation makes an audience go wild for him.

The classical: The Tale of the Tower

Improvisation and animation are his business. This legendary comedy fairy tale the Jester performs together with the audience in the middle of the audience. The sad king searches for the noble-minded saviour who will free the bearded princess from the most unusual tower.

At a later hour the light suddenly goes out and the audience waits in suspense what may happen next. One after the other the Jester gets five red-glowing spheres out of the chest and makes them fly through the room in a breathtakingly beautiful manner. It appears as if the stars themselves were celebrating a poetic dance through the night. No sooner as the lid of the chest is lowered again blazing flames light up the room. Now follows a spectacular fire finale!

Looking for more about this topic?

We are happy to quote you for our team event Medieval Games (Free the Miller).

All year round
Show in German or English

Anywhere in Switzerland and abroad, indoors and outdoors

All year round
Show in German or English

Anywhere in Switzerland and abroad, indoors and outdoors