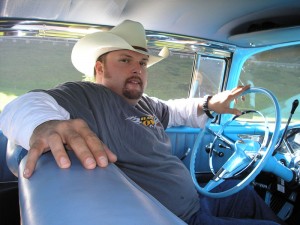 After ten years touring Germany and Switzerland Roger & The Wild Horses have made a name for themselves and can count on a large loyal fan base. The CD with the title Live-2-Two hit the shelves in May 2004.

It is a compilation of the band's favourite pieces, recorded live at their energy-charged concerts at the International Country Festival in Zurich. The latest album came out in early 2010 and for the first time contains self-composed songs. It's got country music in it and it'll rock and roll, promised!

Roger's musical roots lie with the old Rock'n'Roll legends like Elvis Presley, Carl Perkins, chuck Berry and Jerry Lee Lewis. For some time however he has been sharing his heart with country music though.

Roger & The Wild Horses' slogan is: 'We're still wild and everything is Roger!' You will be delighted with this band!

Looking for more information about this topic?

We are happy to provide you with a detailed quote for our western-themed team event Wild West Games at the Country Ranch.

Anywhere in Switzerland, indoors and outdoors

Anywhere in Switzerland, indoors and outdoors