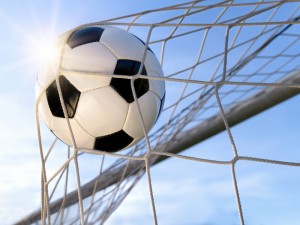 We have created a diverse and exciting corporate event which is all about the most popular team game in the world. Team spirit and fun are the top priorities. This team event makes a perfect company away day especially in a year that coincides with a World Cup or a European Championship.

Choose from a range of exciting games

Each of which is attended by a trained guide:

These games are not physically demanding. They are manageable for everyone.

Give your football event the edge with a sumptuous barbeque or sundowners/refreshments. We are happy to tell you more about the options available.

Ideally this event is organised on the sports grounds of your choice. This way the games can be either staged outdoors on the lawn, or in the gym hall in case of adverse weather conditions. Of course this event can be held in other locations as well such as on farm grounds, on a field or in a park. You choose your favourite location.

Football with a visual challenge

Through a rented gymnasium or barns

Football with a visual challenge

Through a rented gymnasium or barns